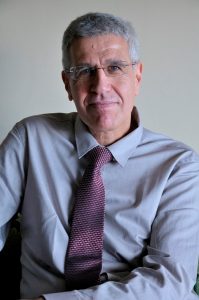 Prof. Dr. Iliya Petrov Lozev, MD was born on April 23, 1956 in the town of Harmanli. He graduated in 1974 from his secondary education in 21 SOUs in Sofia. In 1982 he graduated in Medicine at Sofia University. Initially he worked as a doctor in a factory of “Tolbuhin” – Pernik and then from 1982 to 1992 he worked as a surgeon at “R. Angelova Regional Health Center”. Pernik.

In 1992, after a competition, he started working in a surgical clinic at MI-Ministry of Interior Sofia, and in 2007 also after a competition, he was appointed Head of the Operational Department. In May 2016 he was appointed as an associate professor, in the group “Operational Department” at the General, Abdominal and Vascular Clinic of the Ministry of Interior

In 2008, Assoc. Prof. Iliya Lozev defended a dissertation on the topic “Influence of Preoperative and Intraoperative Duplex Sonography on Results of Operative Treatment of Chronic Venous Failure of the Lower Limbs” and acquired a Ph.D.

In 2016 Assoc. Prof. Iliya Lozev, Ph.D. defends the doctoral dissertation for Doctor of Medical Sciences “Optimizing the use of autogenous arterio-venous fistulas in the construction of vascular access by pre-operative duplex Doppler sonography”.

In 1988 he gained a degree in general surgery, and in 2013 he acquired a speciality- Vascular surgery.

Assoc. Prof. Iliya Lozev, Ph.D. is one of the leading surgeons in the field of vascular access in chronic dialysis patients. In these difficult-to-treat patients, he introduced mandatory preoperative duplex sonographic mapping, which significantly altered surgical behavior. In patients with poorly expressed superficial veins in the upper limb, Assoc. Prof. Iliya Lozev, Ph.D. promoted the brachio-basilic AVF through the transposition of the basilic vein.

Member of: Bulgarian Scientific Society of Surgery; Bulgarian National Society for Vascular and Endovascular Surgery and Angiology; Bulgarian Association for Ultrasound in Medicine; European Federation of Ultrasound Companies in Medicine and Biology.

From 2006 to 2013 Assoc. Prof. Iliya Lozev, Ph.D. is the secretary of the National Association of Doctors Surgeons.

Assoc. Prof. Iliya Lozev, Ph.D. there are over 150 scientific publications, some of which are printed in international journals. He is an independent author of two scientific monographs. He presents and reports at international congresses held in Athens, Milan, Paris, Genoa and Istanbul.

In 2018 he was officially elected as a Professor of Surgery in the Department of General, Vascular and Abdominal Surgery , Medical Institute of the Ministry of Interior, Sofia.